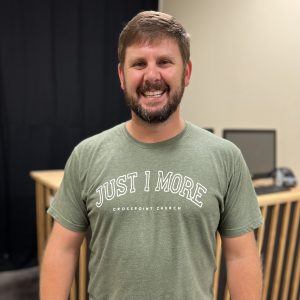 Tait grew up in Silas, AL, a small rural community in southwest Alabama. He graduated from Millry High School (2006). He was called to ministry in the summer between his junior and senior year in high school. Upon graduating high school, he moved to Mobile, AL where he attended The University of Mobile – Go Rams! There he received a B.A. in Theology with a minor in Psychology (2010).  Tait continued his education at New Orleans Baptist Theological Seminary where he received an M.Div. with a concentration in Student Ministry (2014). He completed his academic journey at Southeastern Baptist Theological Seminary where he received a D.Min. in Expository Preaching (2022).

During his senior year in college Tait met Kate. They dated for 7 months and were married on August 7, 2011, just 3 days before the one-year anniversary of their first date. Kate is a graduate of Auburn University where she received a Doctor of Pharmacy (2007). She currently works as a long-term care pharmacist.

Tait is a big sports fan. He loves playing many sports with golf being his favorite. Tait currently serves as the chaplain/assistant coach for the Springville High School softball team. He also enjoys being outdoors, hunting and fishing when time allows. He enjoys cooking also!

Tait joined the CrossPoint staff in May of 2011.