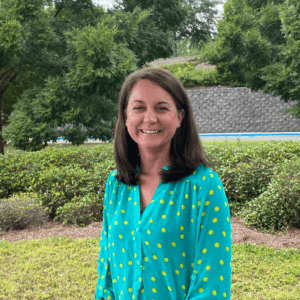 Layne grew up in Greenville, Mississippi and graduated from Washington School in 2003. She then attended Mississippi College where she received a Bachelor of Arts in International Business. In 2006, Layne felt called to the ministry. Upon receiving her degree in May of 2007, she went on to receive a Master of Arts in Christian Education from Southwestern Baptist Theological Seminary in Fort Worth Texas (May 2009). She served on staff at First Baptist Madison MS before coming to CrossPoint.

Layne and her husband Justin were married on March 16, 2018. Justin works for the City of Trussville. They have two sweet girls, Addie Ray (born August 2019) and Gentry (born March 2022).

Layne has been on staff at CrossPoint since July of 2012. She has a passion to see kids come to know Christ and help parents as they teach their children in their home.

Layne loves to run and work out. She loves college football and is a MS State Bulldog fan.